Case Study
Built in 1927, Grosse Pointe South High School is a city gem even today.  However, in 2016 thousands of gallons of raw sewage came up through the sewer main into the large mechanical room in the basement.  The older basement posed several life safety challenges in addition to the incredible amount of biohazard waste which was unbreathable.  The layout was very dangerous given the many sharp edges, confined spaces, constantly changing floor depth, pipes jutting out in walkway, and low ductwork.  This is a a dangerous area to work around even under normal circumstances.
Twelve mitigation technicians were assigned after our Project Manager scoped the project out and presented his remediation plan.  Safety was the most pressing concern because the imminent risk of tearing personal protection gear, physical injury and with dangerous raw sewage present everywhere.  Muck out (removing heavy sewage), power washing of difficult mechanisms, cleaning, disinfecting, testing of surface areas, obtaining environmental clearance and final cleaning was the bulk of this project.  Special odor treatment was circulated throughout the premises to ensure the balance of the property was neutral of the event. 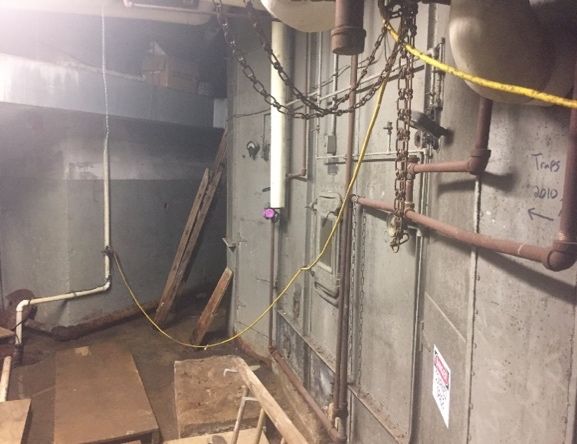 Within four days, our associates affected by the damage began returning to their restored offices and workstations. We had always thought highly of [Signal’s] operations, but this experience of responsiveness, thoroughness and professionalism deserves to be specifically noted.