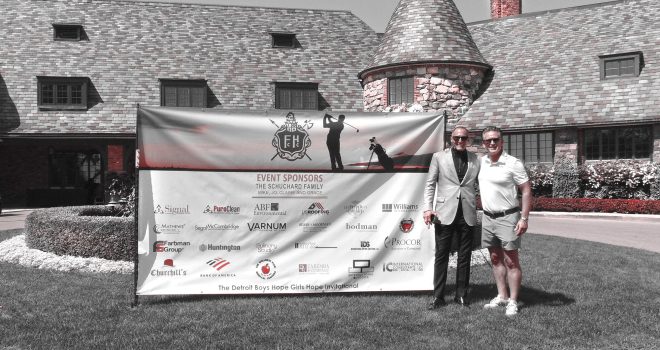 Boys Hope Girls Hope of Detroit is an academic scholarship program whose mission is to help academically motivated middle and high school students rise above disadvantaged backgrounds and become successful in college and beyond.  The organization provides programs that help students meet their full potential by providing value-centered, family-like homes, opportunities and education through college.

Frank has been involved with Boys Hope Girls Hope for many years as Chairman of the annual golf invitational raising to date over $6 million dollars for the organization. The event is attended by many politicians and local government officials, with special guest appearances from Signal President Chad Howard, and PuroClean executives, including President Steve White, Duane Marker, Tim Courtney, and Mike Brodarick. Mark W. Davis, Signal Co-CEO and Frank’s business partner, was there to support this very important initiative to help the Boys Hope Girls Hope kids.  Frank is very grateful for Mark’s continued support.

Golfers, volunteers, and sponsors were treated to a dinner reception and live auction emceed by Paul W. Smith, the legendary Detroit radio icon and notable columnist who introduced the 2021 Hope Scholars.  “In most charities, you do not see where the money is going, and we wanted you to see where the money is going…” said Paul W. Smith, adding that these Hope Scholars are the “leaders who have persevered through adversity and are reaching toward a promising future”.

Among the guests, Dr. William Restum, the recent past CEO of the Rehabilitation Institute of Michigan who has worked closely with Frank Torre for over 10 years.  “I am in awe of his leadership and his energy and am fascinated with his ability to draw multiple resources to promote the causes that he supports…” Dr. Restum added, “Frank is an incredibly resourceful individual that puts service before self, one who creates a level of excitement to really rally everybody around a common goal and have everyone embrace that common goal, and that’s why he is so successful.”

Such initiatives are made possible in part thanks to the generous contributions from businesses and organizations which have enabled Boys Hope Girls Hope of Detroit to continue its mission of helping youth reach their full potential, giving them a stepping stone in life.

Boys Hope Girls Hope Executive Director, Rebecca Limbaugh, quoted as saying, (the Golf Classic) “is always beautifully managed by Frank Torre…” adding that “the outing has raised literally millions of dollars for the scholars.  We are so grateful.”